"Meta Knight is a major character in the Kirby series, appearing in most of the games, manga, as well as the anime. The intrigue and popularity surrounding Meta Knight within the Kirby fandom largely lies in his shrouded motives and his striking likeness to Kirby himself. Meta Knight is the leader of an army of soldiers known as the Meta-Knights, and captains a large airship called Battleship Halberd which may accompany him into the heat of battle. Although Meta Knight first appeared in Kirby's Adventure in 1993, his true name was not known in North America until Kirby's Avalanche was released in 1995." 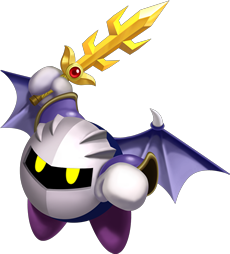 "Meta Knight wears his trademark attire, including his silver mask and his blue or dark purple Dimensional Cape with gold trimmings, as well as a pair of patched or metallic shoes. He has retractable bat-like wings and flies with them in the games. The wings' first prominent use is in Kirby Super Star, where Meta Knight chased Kirby near the end of Revenge of Meta Knight. In Kirby Air Ride, he can fly with them whenever he takes part in a race. Meta Knight's weapon of choice is usually the Galaxia Sword, which is a spiked golden sword with an embedded ruby in the hilt."

"Meta Knight was originally depicted black, wearing a usually-crimson cape and without any armor besides his mask (with yellow glowing eyes in artwork). In Kirby's Avalanche, he had pauldrons, violet shoes, and a brighter skin tone. His design was revised again in Kirby Super Star. In Kirby: Nightmare in Dream Land, he was made bigger than Kirby and given a yellow strap to hold his mask in place. Since Kirby Air Ride, official artwork shows his sword reflecting Galaxia's design in the anime. Since Super Smash Bros. Brawl, Meta Knight was again re-sized to Kirby's height and the yellow strap was often removed." 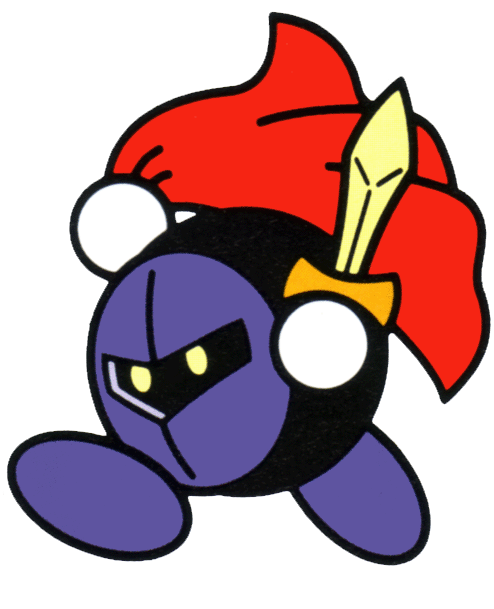 "Due to Meta Knight's way of doing things and his often-hidden intentions, the relationship between Kirby and Meta Knight is unpredictable in nature, and range from being bitter rivals to being steadfast allies to one another and can change at a moment's notice. Meta Knight is a playable character in many spin-offs, and is presented in many of the newer games as a "friend or foe" character."

"As a knight, he respects a code of chivalry, and always offers Kirby a sword whenever he fights against him. However, if the player waits long enough without collecting the sword, it will disappear, and the battle will proceed. In Meta Knightmare Ultra, he is shown trying to become the greatest warrior in the galaxy, suggesting he prides himself in his strength and skill, yet wishes to continue to grow stronger."